The Portland Clinic (TPC), a physician-owned, multi-specialty group serving northwest Oregon, first opened its doors in 1921, when gas was $0.26 per gallon and silent films still ruled the box office. Nearly 100 years later, TPC has built a tight network of five clinic locations with 30 specialties and primary care teams working together to provide the full spectrum of care for patients within the Portland metropolitan area. 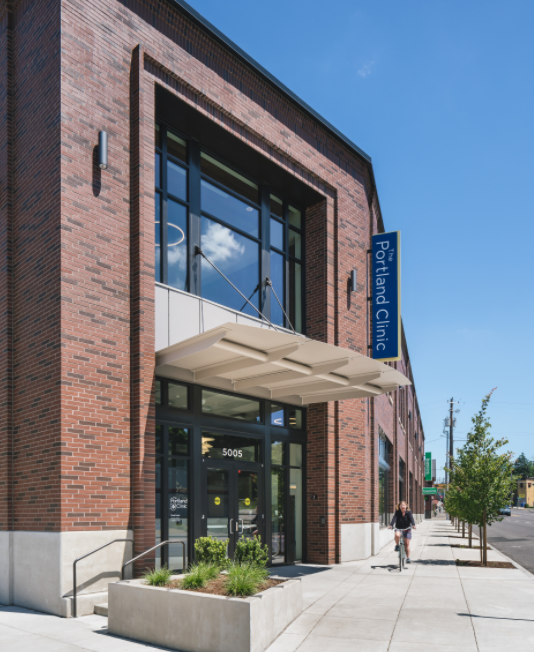 One especially tough challenge for TPC took place in 2016 when two of its three in-house radiologists decided to make career changes. TPC knew something had to be done to keep up with demand after the changes and maintain its reputation as one of the Beaver State’s most reliable healthcare providers.

The group also started to reflect on its entire strategy up to this point when it came to radiology. Things were working effectively with three in-house radiologists, but was there room for improvement? Could they find a way to address the growing need for specialty reads?  Was there a way to staff more nimbly to adapt to these unexpected changes? (A skill that would prove invaluable four years later when COVID-19 hit.)

Looking for an answer

A change was necessary, and there was little time to delay. After deciding that simply replacing the two radiologists wouldn’t be enough, TPC began exploring collaborations with other Portland-area radiology groups.

“We started working with one local group, but their workflow was really hard and we knew that was going to create major problems for our other specialties,” says Lorrie Mullins, a 27-year veteran of TPC who currently manages the radiology department. “We tried another local group, but they had never done anything like that before and we quickly realized it was going to be extremely difficult and time-consuming to build the required relationships, processes, and technology platform from scratch.”

The team then started to consider teleradiology. The thought of working with outside specialists, however, left some members of the TPC family feeling uneasy. Ordering physicians, for instance, feared that teleradiologists would be providing reads from outside the United States or simply wouldn’t have the level of experience and training they had learned to expect from their own radiologists over the years.

Perhaps the biggest concern was that you couldn’t establish a close relationship with a teleradiologist—that they would always feel distant and far removed from the task at hand.

“It had always been so easy for our ordering providers to walk down the hall or pick up the phone to ask a question, and there was a lot of apprehension about losing that,” Mullins says. “Everyone knew our in-house radiologists and their personalities. Losing that was a big concern we had to work to overcome.”

In January 2017, after countless conversations and brainstorming sessions, TPC moved forward with teleradiology, entering into a new agreement with vRad and its team of 500-plus board-certified radiologists.

Mullins says she and her team remained a bit skeptical, referring to the move as “a leap of faith” at the time. But the group’s radiology staff—and others stakeholders at TPC—had been impressed with how much time vRad took to get to know them early on. And learning that, yes, the company’s teleradiologists were based in the United States and highly trained helped much of that initial apprehension fade away.

Members of vRad’s administration, medical leadership, and integration team traveled to Portland numerous times to meet with TPC in person, allowing everyone involved in the conversation to replace emails with handshakes and discuss the details face to face. The visits, Mullins says, “went a long way toward making people more comfortable.”

Ian Seidel, vRad’s area director for the Portland area, was present for many of those in-person meetings.

“We visited TPC regularly, meeting first with Lorrie and then later with as many referring doctors as we could,” he says. “We even spoke with an outgoing in-house radiologist to help us better understand the clinic’s needs. The value of these face-to-face meetings is that they help open up lines of communication, and we still visit to this day to continue building that relationship.”

Another key factor in TPC’s decision was vRad’s unique technology platform, which was purposely built in-house for teleradiology with user productivity and constant communication in mind. vRad, according to a TPC IT specialist, was “the most technologically advanced radiology group we have ever seen,” and that’s the kind of high praise that stands out to CEOs and other executives. vRad’s commitment to AI—using custom-designed models to prioritize worklists by scanning images for specific critical pathologies—didn’t hurt either.

TPC quickly realized its decision to try teleradiology was a good one. Even though the group was down to just one in-house radiologist, the teleradiologists were picking up all the slack—and then some. Patient care never missed a beat, the interpretations met the groups quality expectations, and physicians were pleasantly surprised with how easy it was to communicate with their new partners.

“Prior to making the transition, I worried about how easy it would be to reach a radiologist if I had a question and how quickly we would get critical results,” notes Prasanna Chandran, MD, a family medicine physician and TPC’s chief medical information officer. “But the teleradiologists are excellent, calling us right away with any critical test results.”

TPC’s small group of in-house radiologists had mostly worked Monday through Friday. Now, with around-the-clock access to the teleradiology team, urgent care clinics and others needing weekend reads were suddenly getting their results much more quickly.

“For doctors who just want a good, clean report, the improved turnaround times were really helpful,” Mullins says. “And they got to know their teleradiologists over time, recognizing the names they saw on their reports—it just created a strong dynamic that benefited everyone, most importantly the patients.”

The importance of subspecialty reads

As TPC was looking for a new imaging partner, one of the group’s biggest priorities was beefing up its subspecialty capabilities. They had relied exclusively on general radiologists in the past, but rising expectations for subspecialty reads had caused some ordering physicians to seek help elsewhere.

“We were losing patients to outside radiology groups that could do specialty reads,” Mullins says. “One of our goals was to help keep those patients in-house—but how could we give our physicians the reads they needed? We aren’t a full-blown radiology group, so we never had that variety in the past—but we wanted it going forward.”

Michah Brasseur, MD, a neurologist at TPC, recalls how happy he was to hear about vRad’s variety of subspecialists.

One subspecialty TPC had its eyes on from the beginning was breast imaging. Mullins says it was crucial to bring in specialists who could read mammograms and consult with patients about the results. vRad’s live video conference and image-sharing technology for personal, one-on-one breast- imaging consultations provided an answer, but as with any new technology, concerns were present at first that had to be alleviated over time.

“We were worried at first how patients might react to the giant video screen—after all, most women undergoing a mammogram are in their 50s or 60s,” Mullins says. “But it’s been an incredibly positive experience. Once the conversation starts, patients forget they’re even talking to a screen. It’s comforting for women to get their diagnostic results during the appointment and have their questions answered directly by the breast-imaging radiologist. Our technologists also find the face-to-face radiologist consultations very beneficial for reviewing images and annotations.”

Mullins, who has a background in mammography and years of experience working with inspections and accreditation, was relieved to learn the extent of vRad’s breast imaging program.

“We can call Tammy at vRad and say, ‘We have an inspection coming and we need this, this and this,’ and she knows exactly what to provide,” she says.

Improving patient care, through a pandemic and beyond

TPC and vRad had already been working together for nearly three years when TPC’s final in-house radiologist announced that he would be retiring. Based on how well things were already going, Mullins says the decision to stay with teleradiology and use it for 100% of its imaging needs was an easy one to make.

“At first, we didn’t know how well teleradiology would work or how long we would even be doing it,” she says. “But the results have been so positive, especially the service we receive. I know vRad is a big company, but they don’t feel big when working with them. It’s a great relationship.”

Mullins also reflects on the first half of 2020 and how COVID-19 disrupted so much of the country’s healthcare system. Things have been hard, she says, but working with reliable teleradiologists has been critical for the clinic’s physicians.

“The turnaround times have continued to be amazing,” she says. “In fact, emergent reports for our urgent care facility have come in under 12 minutes on average since May. We never have to worry about that.”

Mullins also shares her relief that TPC hasn’t had to spend 2020 worrying about coverage with on-site radiologists who might get sick or have to quarantine at home. Instead, she knows vRad is always going have someone available to take care of every last imaging exam that comes their way.

“This experience has definitely shown us that telehealth is valuable and works well in situations like the current pandemic,” she says.

The world has changed in countless ways since TPC first opened its doors in 1921—gas is a bit more expensive, for starters—but the group still stands strong, providing Oregonians with dependable, high-quality care. And when TPC celebrates its centennial next year, it will do so with absolutely no concerns related to its imaging needs—thanks to teleradiology.

Schedule a conversation with a vRad expert advisor to learn how a teleradiology partnership can help you fill coverage gaps, address subspecialty needs, and add greater flexibility into your radiology staffing plan.

Next Post
6 things every radiologist should ask in an interview

Get started with vRad!

In the face of increasingly sophisticated and more frequent cyberattacks that threaten the sensitive data of all healthcare providers, vRad is continuously advancing our systems to predict, prevent, and respond to these threats. The latest milestone in our commitment to safeguard patient information and other sensitive data is our achievement of SOC 2 Type II compliance.

One of the cornerstones of the Protecting Access to Medicare Act of 2014 was the development of an appropriate use criteria (AUC) program that requires doctors to consult a qualified clinical decision support mechanism (qCDSM) when ordering advanced imaging services for Medicare patients. As many in the revenue cycle management (RCM) world already know, CMS was scheduled to start penalizing providers who don’t participate in the AUC program on Jan. 1, 2022. The COVID-19 pandemic, however, led to such actions being delayed until 2023 at the earliest.

The latest CMS data suggest that preparation for AUC has been slow going for many healthcare providers. Consider, for example, that just 9% of CY2020 claims subject to AUC policies were submitted with enough relevant data. The delay in AUC penalties represents a significant opportunity for providers to integrate, educate and test AUC workflows to ensure as little disruption as possible takes place when the payment penalty phase officially (eventually) goes into effect.

Academic and hospital-based mammography embraces teleradiology: Shedding 3 preconceptions of the past

In 2020, a growing health system in the Northeast asked vRad for assistance. Like many providers around the country, all of its hospitals were struggling with physician shortages that largely stemmed from recruiting challenges.

Mammography stood out among the enterprise’s hardest-hit medical specialties. Its subspecialized breast radiologists were perilously overstretched.

And the health system had never considered “outsourcing” mammography an acceptable option.